In the past 30 years I have stayed in a lot of hotels. During the first of those years I traveled often for my job, which was in tourism. After I quit that profession, we still traveled during our holidays and long weekends.
There were bad hotels, there were excellent hotels and there were hotels which I will always remember.
Tonight we have just returned from a weekend in Bergen, a village in the province of North-Holland, where we stayed in such a memorable hotel. It’s called Blooming Hotel and we loved our stay there. It is a hotel with a colorful interior, lots of little corners to lounge on cozy  sofa’s, a large reading table, a free library, 2 restaurants with creative and tasteful food, a very good breakfast buffet and a nice atmosphere. And they have roomtypes for every budget.

One of the worst hotels we stayed in was the Pondok Eka. This is the best hotel in Sengkang, a district capital in South Sulawesi, which is one of the largest islands of Indonesia. The bed in our room had only a sheet to cover the mattress and no sheet to cover us, so we had to sleep under a nylon blanket which did not feel and smell like it had been washed recently. The bathroom had grout between all tiles. The electric wiring was hanging loose against the walls, so I did not dare to use my hairdryer because I was afraid I would put the whole town in darkness. At breakfast we only ate dry toast and drank bottled water as the other food looked too disgusting to even consider eating. And the service was surly. We did not want to think about the standard of the other hotels in this town.

Four weeks ago we returned from our last holidays, which we spent in Singapore and on the islands of Lombok and Bali. On Bali we had to say goodbye to another memorable hotel, the Santika Beach Resort on Tuban beach. Over the past years we have often stayed in this hotel which was situated on a long but narrow strip of land. It was not one of those gigantic hotels and offered only 170 rooms. The style of the buildings was Balinese and they were surrounded by beautiful gardens and we enjoyed walking through them on our way to the beach. There were four hotel ducks, which were very popular with the guests and every day after breakfast they were fed the bread leftovers. Guests could use the two large, beautiful swimming pools. Some of the rooms were maybe a little old fashioned and started to look a bit tired, but everything was in good working order and scrupulously clean. The staff were amongst the best we ever met in the hotels were we have stayed and were always friendly and ready to have a talk. 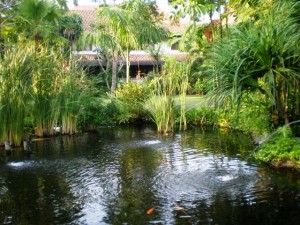 Unfortunately the powers that be decided that the Santika hotel would close its doors on October 10, 2013. It will reopen in 2016 and will then offer 500 rooms and an underground parking garage. We have no idea what will happen to the beautiful gardens but fear that there will be no place for them. And we also have no idea how the staff will fare, as they were all dismissed and will not be offered a new job when the hotel reopens. Still, we enjoyed our last stay there very much as the staff did their utmost to make all guests feel happy.

Upon our arrival we were offered a welcome drink, which is a nice custom in most Balinese hotels. We liked this one very much: it had a lemony taste, but also something sweet, like vanilla. On our last day I asked the barkeeper if he could give me the recipe which he did willingly. It is very easy to make and requires only 4 ingredients. Lemongrass is one of them and that makes it not only a delicious but also very healthy drink (OK, we will not talk about the sugar, which is one of the other ingredients……). Lemongrass is widely used as an herb in Asian food and has a fresh, lemony flavor. Used in drinks it helps fight coughs and colds. Lemon grass oil has antifungal properties and is also used to repel insects. 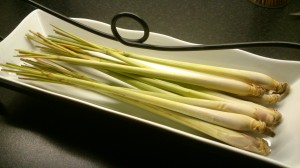 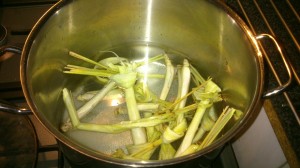 This drink is nice to offer as an alternative to guests who don’t take alcohol, so might come in handy with Christmas and end of year parties just around the corner.
And if you want to battle a cold, don’t cool it, but put some slices of fresh ginger in a tea glass or cup and pour the hot drink on it. You will feel much better after it! 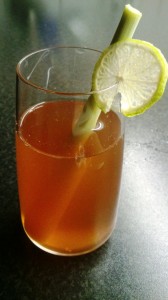 Lemongrass is sold in every oriental supermarket.